I am working on adding a support for ASP.NET performance counters into Musketeer. Compared to other .NET performance counters they have quite surprising instance names. ASP.NET developers decided that their performance counter instances will be identified by names derived from the AppDomain names (more information can be found here). This is probably due to a fact that one process may host multiple ASP.NET applications, thus one counter instance per process won’t be enough. Consequently, in order to match collected metrics with process ids we need to know which AppDomain belongs to which process. How can we do that?

If you have any experience with ClrMD https://github.com/microsoft/clrmd you probably know the ClrRuntime class, which has an AppDomains property. In the main repository there is even this sample code:

That was easy, right? There is one caveat though. ClrMD library is using CLR COM API under the hood, and allows us to enumerate only certain types of processes: processes which have the same bitness and .NET version as our application. So, for instance, it’s not possible to enumerate AppDomains in a 32-bit remote process from a 64-bit application. This restriction made the library useless for me. I’m wondering if it would be possible to use some COM remoting to overcome it – please leave a comment if you have any ideas. 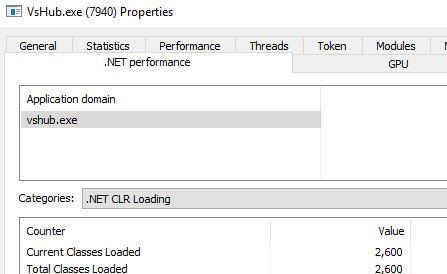 By examining the source code I found out that this tab is rendered by a DotNetTools plugin, which code can be found (unsurprisingly :)) under the plugins/DotNetTools folder. The interesting methods for us are QueryDotNetAppDomainsForPid_V4 and QueryDotNetAppDomainsForPid_V2. I won’t paste the code here as it’s pretty complex. Enough to say that it’s a slightly modified portion of the Core CLR. To make the enumeration safe they first need to acquire some internal CLR mutex, which secures the memory region holding CLR metadata. Then, they extract the AppDomain information from the raw memory. It’s working really fast, but I see two problems with this approach:

Yes, Event Tracing. You might be surprised with this solution, but the CLR Rundown Provider (A669021C-C450-4609-A035-5AF59AF4DF18) provides an easy way to enumerate CLR metadata in all the running .NET processes. With a help from the Microsoft.Diagnostics.Tracing.TraceEvent library the logic can be implemented in just few lines:

The whole code snippet can be found on my gist. As usual, there are some problems with this approach too :):

Sometimes the .NET rundown provider is not found in the system (you may check this by running the command: logman /query providers | findstr /i dotnetruntimerundown). In such a case you need to reinstall .NET ETW providers by running: wevtutil im CLR-ETW.man in the .NET installation folder.

For Musketeer I’ve chosen the ETW approach. I won’t support .NET 2.0 web applications, but I wrote the code pretty fast and it’s easily maintainable. I hope you will also find it useful if you ever had to enumerate AppDomains in a remote process 🙂

3 thoughts on “Enumerating AppDomains in a remote process”

This site uses Akismet to reduce spam. Learn how your comment data is processed.